Scholars with Joyce Campbell (right side)

This was the twenty first year that the Kiwanis Club of Rolling Hills Estates gave out scholarships to deserving high school graduates and continuing students. Thanks to our many sponsors twenty six scholarships were given out.

The Kiwanis luncheon is unique in that it not only honors the students but the parents. The scholarships were awarded to deserving students who have shown special “heart” and performed to the best of their ability in high school. The students came from our local South Bay high schools and included Palos Verdes, Palos Verdes Peninsula, San Pedro, Phineas Banning, Port of Los Angeles, LAUSD Harbor Teacher Prep Academy, and Mary Star. 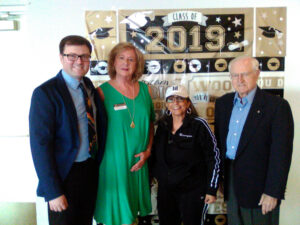 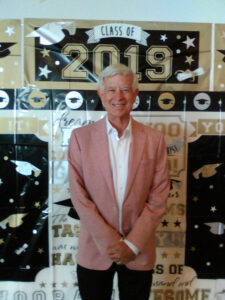 Richard Sherman, Past President presented scholarships in memory of his wife Connie Sherman

Joyce Campbell, Kiwanis member and chairman of the scholarship program presided over the event and gave out three special presentation awards in the name of Jacky Glass, a long time sponsor of the program, In Memory of Connie Sherman, a community supporter and wife of Richard Sherman past president of the Kiwanis, and the Cliff Welsh Youth award.

Richard Sherman presented the scholarship awards on behalf of his wife Connie.

The Keynote speaker for event was Ben Carter, past president and board member. Ben emphasized that the goal of the scholarship program, as well as the other Kiwanis programs, was not just to provide funds but to help the next generation become independent productive citizens and the recognition that by receiving these scholarships they take on the obligation to help those that follow.